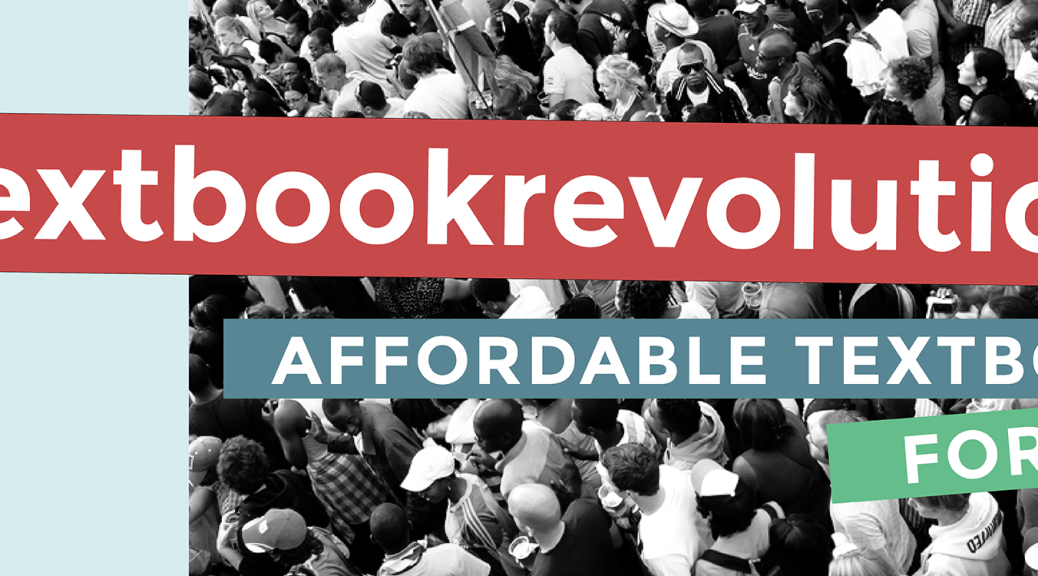 The #textbookrevolution has been our most ambitious campaign thus far, mostly in terms of scale and coordination. It was formulated as a means to get Paperight onto university campuses and to ultimately increase Paperight’s available catalogue to suit students’ needs. By invoking the call for a revolution, we hoped to get students involved in applying pressure to publishers to work with Paperight, or to at least get publishers to commit to making arrangements for students to get their essential textbooks timeously and at an affordable cost.

In all of our communications, there were two important messages to spread among students:

1) Textbooks are cheaper through Paperight outlets.
This was our less important sales message that was aimed at specific departments that we had prescribed or related books for.

2) Hate overpriced textbooks? Speak up to join the #textbookrevolution.
This required students to speak out about using a service like Paperight to increase access to affordable textbooks. This was meant to put pressure on publishers to make more of their core textbooks available on Paperight.

Overall, this has been the most successful sustained marketing effort in the history of Paperight. We demonstrated our rebellious and youthful brand image and we have been overwhelmed by the reactions it brought back. We can safely say that we are known by scores more South African varsity students, lecturers and administrative staff than we were before and we have planted the significant seed of change. We now have a comprehensive contact list for individuals to approach to take this campaign further and meetings will be made easier by the increased knowledge of what we’re about.

We did not intend for sales of current titles to be our main message simply because of our limited catalogue for varsity students. That being said, our paid adverts in student magazines highlighted products that students might need, as well as products that would be of interest to the broader community to whom the magazines are sold.

We were only able to offer books prescribed to English Literature and Nursing students. We also advertised our teaching guides and O’Reilly IT manuals to the relevant departments. Of the books that were advertised, we did not make a noticeable increase in sales for those titles specifically. However, we have seen a rise in sales of other books which can attributed to a combination of:

a) increased engagement from outlets to push sales (with the use of Paperight marketing materials, i.e. campaign and product posters, catalogues, etc.)
b) increased Paperight visibility in the media/on Facebook/on Twitter, and
c) the return of customers from the previous year (as well as their referrals to friends).

We had three positive responses from student media outlets. Both Rhodes Music Radio and UJfm scheduled interviews with Arthur to discuss the campaign. Then Perdeby, the Tuks student newspaper, promoted the #textbookrevolution and our second live Twitter debate through their Twitter account which led to a lively, healthy discussion. Recently, we have also been featured by the Varsity newspaper (UCT) in an opinion piece. Despite being a lazy, inaccurate description of the campaign, it has raised the visibility of the campaign on campus even further and we will be sending out a response to the article to set the record straight. Sometimes, even bad press is good press. One of our most successful partnerships has been with UCT’s student run organisation, SHAWCO. Julia Norrish, their President, has become a Paperight fan and has championed our cause on campus. In addition to allowing us to include SHAWCO’s logo on our campaign website in the supporters’ bar, Julia also consented to place a splash page on Vula, the UCT online student portal, that would explicitly show SHAWCO’s support for the campaign. The splash page went up for 6 weeks from mid-February 2014. Julia also showed her support by calling out the recent inaccuracies in the Varsity newspaper article.

Our Vula splash page and campaign t-shirt design both featured the ubiquitous face of Che Guevara. Far from invoking his politics or attitudes, we simply settled on an image that is easily recognisable to carry the sentiment of revolution. In the office, this was hotly debated and I will admit that we settled on Che mostly due to lack of a better alternative. However, Stellenbosch University students reacted strongly positively to the image and we had many requests for free t-shirts from the students we encountered.

Overall, Rhodes has been the most receptive university to the need for a #textbookrevolution in terms of their responses and engagement with the campaign. Their Dean of Students has Tweeted about the campaign, their registrar passed on a message to lecturers informing them of the #textbookrevolution, their SRC hooked up with ABM Office National (a brand new Paperight registered outlet) to advertise on campus, and Arthur was interviewed on RMR. I believe this may be because Rhodes is more keenly aware of the difficulties students suffer due to their location in the Eastern Cape and a chronic lack of resources.

Shaun Swingler joined us once again on our visits to local Western Cape varsities in order to pull together a campaign video. The resultant video is very indicative of the reactions we’ve had so far.

We took the #textbookrevolution petition to UCT and Stellenbosch University to give students a tangible way of showing their support. They were asked to provide their email addresses along with details of books they have struggled to afford or find. This will help us to prioritise our discussions with textbook publishers and enable us to contact the students in future when we have their books on Paperight. We gathered more support in physical form (over 1000 signatures) than we have online (81 signatures). I believe this is due to the effect that the face-to-face promotion had on students. It is difficult to fire up enthusiasm over yet another online petition. The reactions to our Paperight drinks coasters have been very positive, especially when handed directly to students on our campus days. Our tagline “Cheaper Textbooks. More Beer” caught their attention and made for great conversation starters. Their effect in local bars is far more difficult to gauge. Most bar managers and bartenders have been helpful so far as placing the coasters around the bar and replacing damaged/missing coasters. However, bars are very busy places and ultimately, our coasters are not their biggest priority so it is difficult to gather feedback about how they were received by students. Regardless, when they were originally placed, we saw students pocketing them to take home which is exactly what we wanted. If we do this again in future, I would suggest printing less and limiting their use to direct handouts to students.

An unexpected, yet welcome effect of the #textbookrevolution campaign has been that the team has grown closer and our mission to increase access to all kinds of books has gathered further focus. Refer to Philippa’s article about the Blaze of Glory for context about where this campaign fits into the grand scheme of things.

Note: The Twitter debates and the Paperight Cover Art Competition 2014 have been elaborated on in their own article.

One thought on “The #textbookrevolution Campaign: hold on to your seats for this one!”