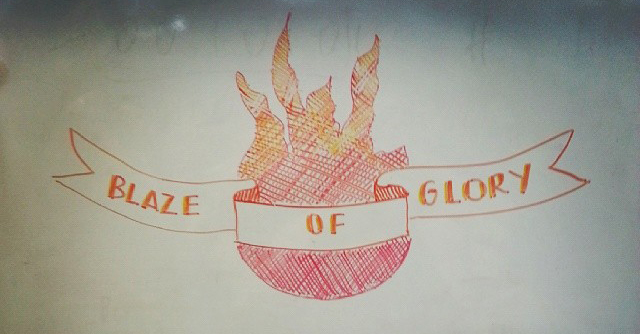 I went away over Christmas time and came back to the office a couple of weeks later recharged and ready to start the Blaze of Glory. Our funding was due to run out at the end of August so this was the last main spike in the academic book buying cycle available to us and we needed to make it count. By this time our focus had shifted from the high school market to the university market as we had realised that Paperight could make the biggest price reduction in this area. My part in BOG was to hack away at the reformatting of all A4 documents on the site, and then to reformat all Paperight novels, prioritising those on the University Prescriptions list.

The look of the Paperight PDF saw a few improvements over the years, first reducing the ad-space that had seemed like a good idea at the time but was never used, and then by removing the lines above and below the watermarking. The final product looked so much better after these improvements were made. But once the changes had been made on the site I needed to update the PDFs that had already been created using the old format. To do this I used the new PDF-PDF converter tool on the Paperight server. This tool had been in the pipelines for a long time and took quite a bit of testing and bug reporting to get it working properly, but when it was ready to go it worked like a dream. I simply had to select the PDF I wanted to convert, click convert, and wait.

I feel really lucky to have worked in such a sharing environment and to have had so much training.

I then moved on to the reformatting of the university setworks. In fact, I was reformatting some, but also adding many books that were not yet on the site. The list was 157 titles long. First I needed to learn how to use the HTML-to-PDF converter which had also just become operational. I was excited to learn how to prepare books from HTML using this shiny and much awaited tool. Tarryn, the fearless trainer, taught me how to scrub HTML, a process that at first sounded exotic and turn out to be a little less than. Before I arrived at Paperight I hardly knew what HTML was and I certainly didn’t know what CSS was, nevermind how they related to one another. But Arthur has such a great philosophy of training his staff on all aspects the company and I gained skills beyond what were necessary for my day to day job. I feel really lucky to have worked in such a sharing environment and to have had so much training.

I began scrubbing those books prescribed at the University of Cape Town and Stellenbosch University as we were carrying out targeting marketing campaigns at these institutions, and I found that I quite enjoyed it as long as I wasn’t scrubbing Tristram Shandy or The Tragedie of Mariam. And I was able to listen to podcasts while I worked so I listened to a lot of ThisAmericanLife. (I mean like a whole lot.)

It struck me that these students were Paperight’s target market, but this was the first time we had really spent any time with them, on their turf.

This task, interspersed with our #textbookrevolution outings to Stellenbosch University and UCT, has been my ongoing task to date. Our outings to the Universities were fantastic and challenging. We handed out specially designed beer coasters to students and asked them to sign our petitions for cheaper textbooks (see Marie-Louise’s blog post for more on this). It struck me that these students were Paperight’s target market, but this was the first time we had really spent any time with them, on their turf. It was tiring approaching groups of students and getting them excited enough about the idea to sign the petition, but it was incredibly rewarding when they ‘got it’ and were genuinely enthusiastic about it.